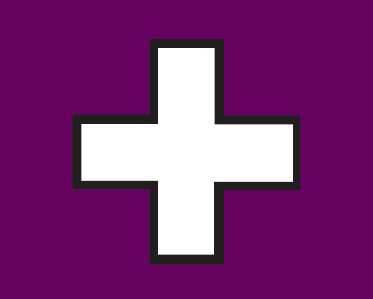 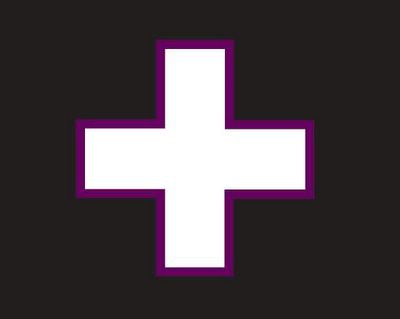 "Thinking back to being a 19 year-old guy who didn't want to go through with the abortion, I know that in spite of this feeling, I was paralyzed with fear over how my family would react. I might have turned to some people, but not to my family immediately. If I had some visual symbol of all of the people willing to help me get the help I needed, the story might have been different. That is what this effort hopes to achieve."

At the March for Life today, 20,000 cards with these symbols were handed out, asking people to visit the website for all citizens--pro-life and pro-choice--who want to be known as Americans On Call.

Think: "the mission of Feminists For Life coming to fruition" (pro-choicers, please read that webpage's text before deciding you really disagree) -- without creating another pro-life group to fund. A hopefully-national "identification movement."

Organized by a friend, a post-abortive young graduate student (who I met a couple years ago) and his friends (girls and guys), I think this is an idea whose time really has come.

It's based on the seemingly increasing reality that many abortions in our country could be (could have been) avoided if more women knew where to turn. What needs to happen is for people who are willing and enabled to know how to get such help -- to be everywhere a woman turns.

To be easily and instantly recognizable. Hence the name, "Americans On Call."

It costs nothing to "join" and nothing more than what many are probably already doing to help women in crisis pregnancies find real-life help and thus better alternatives to abortion.

[see more on the NOT's on this page, including answers to the questions, Can I be an American on Call if I am Pro-Choice? (YES), What if I'm not Christian? (NOT REQUIRED IN THE LEAST), How should we do fund raisers? (YOU DON'T)]

The Goal: To help—not re-create—all of the good pro-life (and other) efforts across America be more recognizable to those who can benefit from them.

The Plan: Every person, from the president of a pro-life law firm, to a young teen, to a pro-life politician, to a woman who thinks abortion should be legal but rare, wears this symbol every day—on a t-shirt, a hat, or a lapel pin. Maybe they put bumper stickers on their cars, or fly the flag outside their houses, or put a sign on the front lawn.

The symbol means merely this: "How can I help you?"

The organizers admit that if this sounds a little ridiculous, maybe it is.

I don't think it is.

In fact, in smaller ways, this is already being done by isolated pockets of people nationwide (see more on that below).

Below, I've paraphrased and/or quoted from the notes they've shared with me (some of this is on their website in some form or another but it is well worth repeating).

The Look: A white cross (or if you don't like crosses, it's just a plus sign for "something positive"), outlined in black, on a field of purple. The purple represents melancholy, repentance and/or sacrifice. The black represents mourning and the white represents peace and victory in helping women have better alternatives to abortion.

The second version is a white cross outlined in purple with a black background. These are worn by women and men who have experienced an abortion and are willing to help another who has experienced one and has not yet healed from it to do so.

For anyone wearing this symbol, it means you are making yourself available to help any girl who finds herself pregnant—during and after the pregnancy. You also are helping women not get pregnant unexpectedly. If you have the flag flying outside your house, it means a woman in need can come knock on your door and you will do anything you can to help. If she needs money and you don't have it, then you can call on the 10 other people in your town who are part of the movement to help come up with the money. If she needs to get to the doctor, you can help her make an appointment with a (pro-life) doctor and give her a ride. If she is afraid to talk to her parents, you will help her find those who can help do that in an environment where other adults are present and willing to help them work things out. If she is a girl who has been through an abortion, you will help her find and receive the help and caring she needs. If she needs legal help, you will help her find it. If she needs to get away from an abusive relationship, you will help her contact the authorities. If you are rich and you do not have time to do these things, you will make your money available. If you are young and you wear the pin it also means you are striving to live a chaste life before you are married, you will help others do so, and if you slip up, you will not be afraid to ask for help.

There probably is not a single abortion clinic in this country that does not get protested. At the same time, there probably isn't a single woman who walks through those doors who doesn't know exactly what she is about to do. Telling her it is murder, or holding up a sign of chopped up fetus is not doing anyone any good, except the abortionists who now look like a friendly face. Instead, if every person involved in those efforts held up a sign saying "How can I help you?" the incidence of abortion in this country would plummet. More importantly, if that girl, from the time she got pregnant to the time she walked up to those doors, confronted a purple flag with a white cross thousands of times, the likelihood that she would not have asked for and received the help she needed will also plummet.

Every pro-life group in existence should have this symbol somewhere on their website, and each of these group's employees should wear them on a daily basis, and go on doing what they did before this, with more of an eye toward conciliatory language and efforts.

Something similar is The Gabriel Project. But this is only done by Catholic churches, to my knowledge, and only for helping women in crisis pregnancies to avoid abortion. Here's one pair of churches active in that project, among 300 Catholic churches doing that nationwide,I believe.

And Emily read about a similar effort

I think it was in Lumina's last newsletter -- about a high school group that trains other high school students how to be safe to talk to if you're another student who is pregnant or has had an abortion.

Like with this idea you're mentioning here, once you get the training, you wear some kind of a pin or insignia that means "I am safe to talk to, etc., about these things"

At the time I read it I thought that would be a totally awesome idea if all *adult* Catholics and other folks could do the same thing, if indeed they are trained and safe. So maybe this idea these folks are working on will be that type of thing.