"The genesis of the movie stems from Flora’s own post-abortive experience..."

Our friend, movie producer Jonathan Flora, sent me this news:

UDPATE, PHOTO BELOW: OUR OWN ANN MARIE COSGROVE OF SILENT NO MORE MINNESOTA WITH JONATHAN AND DEBORAH FLORA AT MFL06... 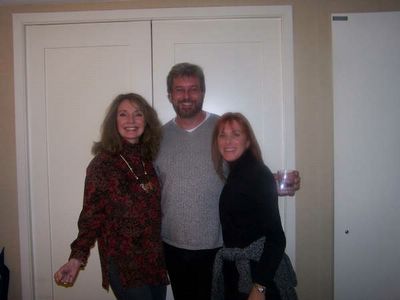 Writer/Director Jonathan Flora To Speak At Screenings Of “A Distant Thunder” At 33rd “March For Life” Events In Washington D.C.

BURBANK, Calif. – When pro-life activists gather in Washington, D.C. on January 23rd for the 33rd March for Life this year there will be a new face on stage – the face of a Hollywood filmmaker. Jonathan Flora, an award-winning producer with Disney's Buena Vista Home Entertainment has been invited by March for Life founder Nellie Gray to share the stage with, among others, Bob and Mary Schindler, the parents of Terri Schiavo and Father Frank Pavone of Priests For Life. The invitation follows Flora’s independent creation of “A Distant Thunder”, the first motion picture to address partial-birth abortion.

Flora will also be speaking at a reception that will feature his movie and will be hosted by Tony Perkins, President of Family Research Council and Father Frank Pavone the following Tuesday in the Capitol.

Here's some more reviews (more than at our original   posts):

LA Daily News: “A powerful thriller and a gripping legal drama. It's engrossing, terrifying, and convincing. It will move you; it will change you."

Steve McEveety, Producer of “The Passion Of The Christ,” “Braveheart” and “We Were Soldiers”: “I¹d call ‘A Distant Thunder’ a nightmare of a movie but, nightmares are not normally representative of reality. This nightmare is happening every minute of every day. The extra bonus here is that these filmmakers know how to shoot.”

The genesis of the movie stems from Flora’s own post-abortive experience, something he has had to come to terms with, coupled with the discovery a few years ago that he and his wife were unable to have children. Flora struggled with the paradox. “Here we are praying fervently for a baby while America is treating unwanted pregnancies like a common cold at the rate of more than 4,500 abortions a day. 95% of them elective,” said Flora.

The Floras proved the doctors wrong, eventually conceiving two children naturally. It was during that time when he stumbled across partial-birth abortion. “I was shocked when I learned what it was,” said Flora. “The more research I did and the more I talked to people who also had never heard of it, the more I knew I had to try to bring this out.”

Unrated, the film targets teenagers and adults on both sides of the abortion debate, offering a thought-provoking, but not preachy, look at a horrible and legally-sanctioned procedure.

Reminiscent of supernatural thrillers by M. Night Shyamalan and reflecting the best in cinematic courtroom and horror dramas, “A Distant Thunder” takes viewers through a maze of disturbing hints, twists, symbols, and flashbacks until at the end they are stunned at what they've been watching.

So powerful is the film's main thesis, once the pieces come together, it can change lives. It was for this reason, Flora says, that he chose to confine the film to 35 minutes, so it can be widely viewed by educators, school classes, religious groups, political leaders and lawmakers. But he adds, “We’re not going to stop this practice by changing the law. It has to be done by changing hearts and minds and often, it’s done one person at a time.”

It’s also helping to save lives. Flora learned through a series of connections, that a Los Angeles college student had passed the film on to a 20-year-old woman who was considering an abortion. After viewing the film, the woman decided against it. The woman’s boyfriend, who viewed it with her said, “We can’t do this, let’s get married and have this baby,” the college student wrote to Flora. In August, Flora learned the couple are expecting a boy.

Flora feels that using the medium of film to convey a message is appropriate and certainly nothing new. “However, our goal is not to vilify anyone,” said Flora. “With ‘A Distant Thunder’ I am trying to educate people with facts but also to entertain them. That’s why I wrapped this information in a compelling story with some great effects.”

“A Distant Thunder” is now available on DVD at Amazon.com, Netflix.com, www.adistantthunder.com, and Ignatius.com. For more information, call 818/822-9492.