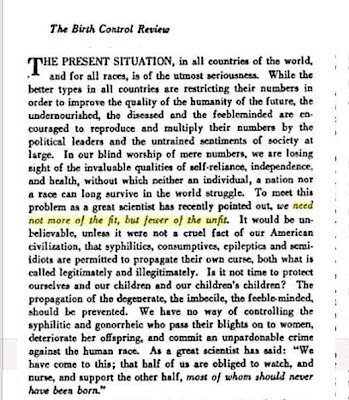 Click on these images to enlarge them, either in a new tab or window or just straight from here. 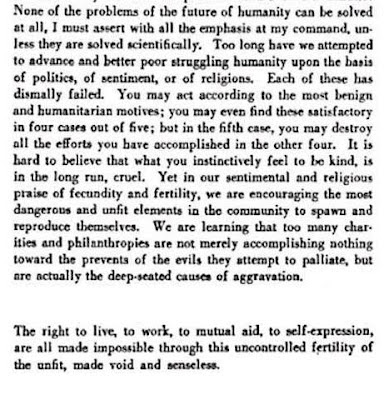 Or how about this one? 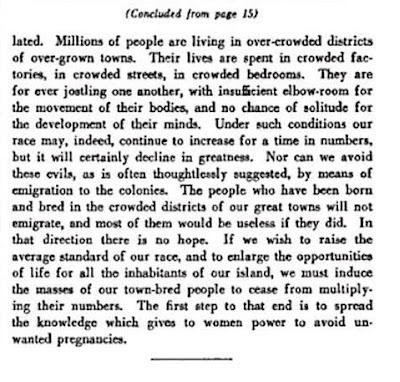 Margaret Sanger's own words, as digitized by Google itself:

The article in question, that no one at TomPaine.com's supposedly "Urban Legends of the Abortion Debate", or FactCheck.org, or anywhere else, has been able to refute or explain away, begins with the heading:

Below is the entire two-page screenshot from which the above were culled (the essay is found, below, near the lower left corner of the top page). Feel free to just go look up the original digitized version yourselves at that link above. You'll need to scroll down to the Volume V, Number 8, (1921), p.19.

We first publicized this all waaaaay back in 2004...

and again in 2008, when we quoted Angela Franks, Ph.D., author of "Margaret Sanger's Eugenic Legacy." (On her website, she frankly debunks the misquotes attributed to Sanger, but also tells the inconvenient truths about the things she really did say and write and with whom she not only associated but advocated and reprinted their eugenicist writings...)

Or are you more interested in what the Wall Street Journal wrote in its 2008 article "The NAACP and Black Abortions"? We quoted it several times then. You'll have to logon to the WSJ with a subscription, but the article is still there.

As for Susan G. Komen, we've also been writing about their being in bed with Planned Parenthood for the wrong reasons since 2004, when Eve Sanchez Silver resigned her position as a charter member of The Susan G. Komen Breast Cancer Foundation's National Hispanic/Latina Advisory Council (SGK).

This has been Komen's problem for sooo much longer than any of you who think you're reading "new" news could imagine.

And it will likely continue to plague them, as long as they are helping Planned Parenthood. They were not "responding to the public" when they capitulated and reversed their recent decision to stop giving money to PPFA (that's rather self-serving of anyone to think that Komen was just listening to "the people", isn't it?).

No, Komen just blinked. They just knee-jerked to 20-odd elected politicians who get beaucoup. bucks. from. Planned. Parenthood. to. keep. them. in. office.

Once again, for emphasis:

"Millions of people are living in over-crowded districts of over-grown towns. Their lives are spent in crowded factories, in crowded streets, in crowded bedrooms. They are for ever jostling one another, with insufficient elbow room for the movement of their bodies, and no chance of solitude for the development of their minds. Under such conditions our race may, indeed, continue to increase for a time in numbers, but it will certainly decline in greatness...If we wish to raise the average standard of our race, and to enlarge the opportunities of life for all the inhabitants of our island, we must induce the masses of our town-bred people to cease from multiplying their numbers. The first step to that end is to spread the knowledge which gives women power to avoid unwanted pregnancies.
...
"Yet in our sentimental and religious praise of fecundity and fertility, we are encouraging the most dangerous and unfit elements in the community to spawn and reproduce themselves. We are learning that too many charities and philanthropies are not merely accomplishing nothing towards the prevents of the evils they attempt to palliate, but are actually the deep-seated causes of aggravation.
...
"The right to live, to work, to mutual aid, to self-expression, are all made impossible through this uncontrolled fertility of the unfit, made void and senseless.
...
"To meet this problem as a great scientist has recently pointed out, we need not more of the fit, but fewer of the unfit. It would be unbelievable, unless it were not a cruel fact of our American civilization, that syphilitics, consumptives, epileptics and semi idiots are permitted to propagate their own curse, both what is called legitimately and illegitimately. Is it not time to protect ourselves and our children and our children's children? The propagation of the degenerate, the imbecile, the feeble minded, should be prevented.
...
"As a great scientist has said: 'We have come to this; that half of us are obliged to watch, and nurse, and support the other half, most of whom should never have been born.'"
~ Margaret Sanger;