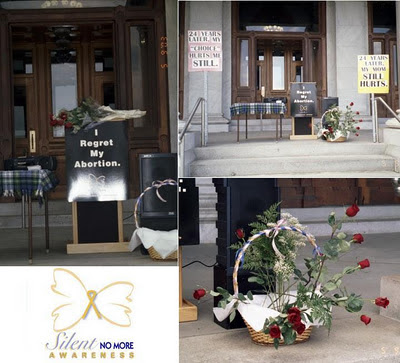 Thank you for all your prayers. I truly felt all of you and all my friends were with me in spirit, praying for me, for this.

There was absolutely no press there, and I was the only person who could make it. One of our ladies from CT had chemo yesterday for her breast cancer and understandably wasn't up to it today, please pray for her! Three more were from Westchester, NY and the one who was to drive had 103 fever yesterday! One of those 3 had called me just two days ago after her pastor reprinted my online column about the event in their Church bulletin! I found it so amazing and a blessing-sign: her name is Norma!! She's in touch with Theresa now, and plans to attend an RV retreat here in Sept.

One person at a time...I keep telling myself that...

I am discouraged, but I did the whole thing anyway and have an audiotape of it and several photos taken. There were two capitol policemen, one of whom came up beforehand and we talked for awhile. He asked some questions, but also nicely tried to refute the breast cancer risk increase, saying that it was as common for women in their 20's and 30's to get it as in their 40's. I replied that I did not think that was true, but if it is becoming true, then he could credit that to THIS fact: that 2 out of every 5 women HE HIMSELF KNEW had had an abortion (his eyebrows went up at that), thus doubling their risk of breast cancer. And he may NEVER know that they had an abortion because they cannot admit it out of shame. Several things I said, about the 20-plus years of denial I myself went through, how many women were there in January and have signed affidavits, clearly surprised him. It was all news to him.

There were two passersby just when I was taking the red roses from the bouquet and reading the names of our babies. One African-American woman just stopped, listened and stared as I read the 16 first names of the babies we honored on the Rachel's Vineyard Retreat I attended last Sept. She could read my signs. She knew what I was talking about, even if she hadn't heard the entire presentation.

There were two businessmen who passed by, reading the signs, and one worker taking a break sitting next to his truck in the park just below me, who could hear every word over the sound system.

I pray that those police officers and passersby heard even one thing that they will share with another person for their good, and then they too will impact another's life, and so on, reaching those whom it is meant to reach despite today's disappointing response.

It will be in God's time, I guess. I am so dismayed that no press was there, even though I contacted them all, plus all CPCs, the Dioceses and such, with 4 weeks notice. No one in CT seems to be getting the word out. Was this typical when other states' efforts were in their infancy? I know that there are suffering women in this state. So many people seem to prevent this from being made known. With a pro-abortion (but Republican!) Governor and Ltnt. Governor, and an Attorney General who sues sidewalk counselors regularly (but still loses), who sided with N.O.W. in the RICO case and was the one who actually penned Roe V. Wade (!!!), we have a lot of work cut out for us.

We are such a stiff-necked bunch in this state. And praying about how to better PR the mid-June event. I will try to do that in Bridgeport (not our Capitol), as my local paper will do a story on SNM to coincide with the Tues. June 17 motion to overturn Roe V. Wade being filed by Norma McCorvey in Dallas that same day.

Tonight, on my own, I go with a sign to silently protest the first 3 hours of the Amer. Cancer Society's Relay for Life in my town. I made a two sided sign; the heading says: "Who says abortion increases breast cancer risk? (While ACS denies it)" and lists 16 medical scientists/groups/researchers/studies, including the pro-choice Dr. Janet Daling. This town has never seen this kind of thing before. Should prove interesting. Starting at 6 PM ET, and then I return at dawn until the relay ends at 7 AM when they all have to walk past me to go home. 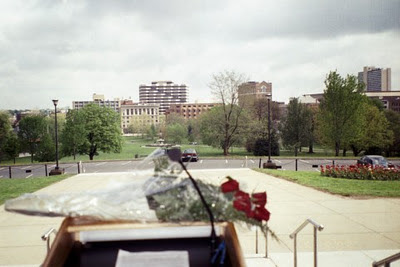 the view from my speaker's podium that day

And my friends gathered around me in my dejected spirit...

I know the press thing can be discouraging. We had zero press at the LA event at Downtown City Hall on January 22nd and very little at the Sacramento event in January. Remember, we are never REALLY alone. We are ALL in our infancy in many ways. We've only just begun and who knows the impact the policeman will have on those he is in relationships with... or the guy at his truck, the businessmen, the woman...
Caron Strong
California State Leader

You are right, it is one heart at a time. Your article brought one heart out this week and no one but God knows what else it did or how many hearts it touched. To be sure, it touched my heart today as I thought of you out there alone witnessing for us. we need not be discouraged...all in His time...all we need to do is be faithful. When I began this work almost 11 years ago there was nothing much out there ...it was discouraging at times but I kept reminding myself that I was not in control and if I truly trusted God I would know He was working...well, look at things now, so many groups, and although women may not be public, they are coming forth in numbers now for healing and that is really the important thing. We have 20 for the Day of Prayer and Healing on the 24th and the RV on LI has 8 for the same weekend! That is 30 women!
Theresa Bonopartis
New York

Do not be disappointed. People heard and it will be the reward for the fruit that you have not seen that will be waiting for you. We know why the press is not there. The enemy wants to discourage, but he is a liar and fighting a losing battle. May God bless you and pour out his favor on you,
Molly White
Texas

Annie, yes, I will pray for you and any other person who has the courage to go. You are truly an inspiration to all. I can see now you are inspired by the Holy Spirit to be God's hands, heart and voice to others, to help heal those in pain. May Our Lord continue to bless you and your son for all the good you are doing.
With God's love,
Fran
(from my hometown)

TOMORROW'S POST: What did I actually SAY at that "Mother's Day Press Conference"?