"Don't let anyone rob you of hope."

He removed the elaborate golden throne and the formal red carpet underneath it; he uses a simple, white wooden chair--"something more appropriate for the disciple of a carpenter"--with no carpet.

He doesn't wear the gold-embroidered red stole, symbol of the heir of the Roman Empire, nor the red cape, nor the red embroidered shoes; he wears simple white for all his vestments. He wears the same old black shoes underneath that he's always worn, and the same black cleric pants under his white cassock, to "remember that he is just another priest."

His papal ring is silver, not gold, and he uses a plain metal cross, not a gold one with rubies and diamonds.

He throws away prepared remarks and asks six and seven-year-olds if they want to ask him any on-the-spot, unprescreened questions, then answers them.

He meets and talks with such children weekly for up to an hour. WEEKLY.

He lives in the same spare apartment he's lived in a long time, and eats with other priests in the hotel's communal dining room, not in the papal residence, because "I need to live among people", and he won't vacation at the palatial summer papal retreat.

He "kisses the dozens of babies handed to him by his bodyguards; and he tousles the hair of older teens and pats them on the back, asking them to pray for him."

When asked by a teacher about "compromised" politicians, "Francis said all Christians had an obligation to be involved in politics."

Funny, how even the Associated Press refers to him, both in its headline and in the article, as "Francis."

He chastises Catholic churches who refuse to baptize the babies of unwed mothers, who choose life instead of abortion.

He rarely administered Holy Communion at his Masses, either as Archbishop or as Pope, if there was a chance he'd be giving it to anyone who was a public figure and a known violator of the Commandments. It also can be inferred from prior conversations recorded in a book that, when it comes to pro-abortion, or otherwise sinful public figures (including politicians): "I do not want these persons to approach me for a photo," meaning, they would be receiving Holy Eucharist from the hands of the Pope.

Francis just won't do it. It's a significant statement. And it's getting more significant: he re-emphasized the point to his home country of Argentina just this past March, citing the Aparecida Document again as a framework:

"We should commit ourselves to 'eucharistic coherence', that is, we should be conscious that people cannot receive holy communion and at the same time act or speak against the commandments, in particular when abortion, euthanasia, and other serious crimes against life and family are facilitated. This responsibility applies particularly to legislators, governors, and health professionals."

Hear that, Joe Biden and Nancy Pelosi, both pro-abortion and both CINOs (Catholics In Name Only)?

I pray that Francis will re-emphasize the the Aparecida Document to the whole world.

I was in awe of Pope Benedict's mastery of the doctrine and dogma of the Church, of his conservatism regarding the faith and its tenets.

But I am in more awe of Francis because he IS "Francis." You can see the man. The simple man, inside the holiness. The forthright man. You can see the disciple of the carpenter.

I imagine it was possibly this way, also, with Christ.

"Let the children come to me." 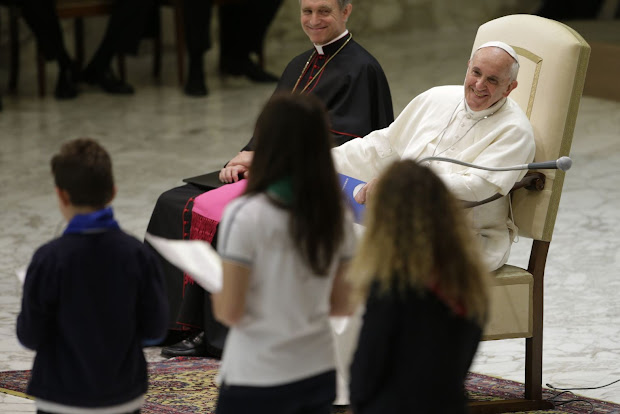