an After abortion: Numbers at Snowy March For Life 2014 Equaled Numbers at Springtime March for Women's Choice 2004
REAL, CONFIDENTIAL, FREE, NON-JUDGMENTAL HELP TO AVOID ABORTION, FROM MANY PLACES:

That's courtesy of none other than the Washington Post, whether they know it or not.


Co-blogger Joy wrote in her post below how we have long been aware of the mainstream media's (MSM) media blackouts of every March for Life. As always, the media all repeats the same old tired "Thousands of marchers", including USA Today.

But two little paragraphs in today's Washington Post "coverage" just exposed themselves as the obstructionists they really are. Big-time.

"The world’s largest antiabortion event, held on the anniversary of the Supreme Court’s Roe v. Wade decision, grows younger each year. The Mall between Seventh Street and the Washington Monument was full for a few hours with youth groups from across the eastern half of the country.

"Abortion has been legal for their entire lives, and movement leaders say the latest generation of activists is creating a more upbeat culture. Graphic images of fetuses and angry sermons shouted through bullhorns were rare. Instead, the Mall was filled with people holding placards with slogans like, “We are the pro-life generation,” and large images of a smiling Pope Francis. Speakers pumped out dance music." [emphasis by this blogger]

If "the Mall was filled with people" readying for this March, then this, below is the size of that space, and also what that same space would have looked like, full of people: 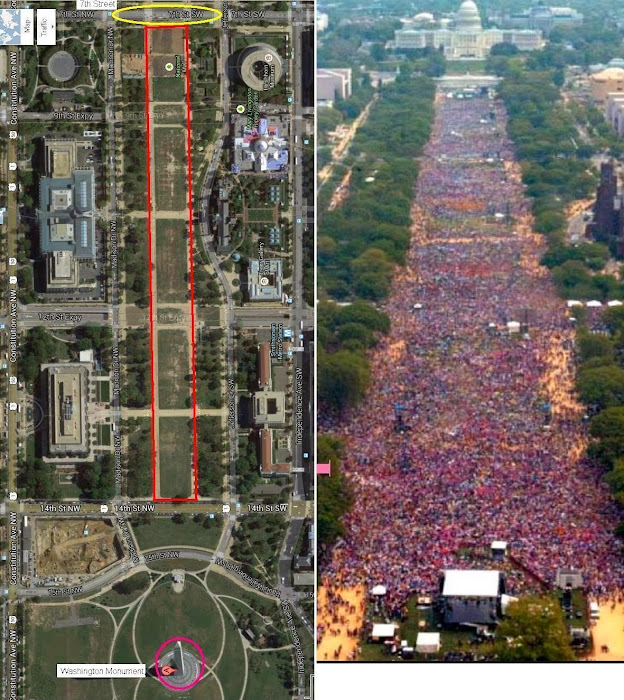 The red rectangle in the left image (screenshotted from Google Maps) is the "[National} Mall between Seventh Street and the Washington Monument."

The righthand image is that same exact space, full of people, but not of a March For Life. Note the green trees.

No, the righthand image is the photo mysteriously allowed to be taken from the top of the Washington Monument (something supposedly prohibited and certainly never allowed for any March For Life) of the April 25, 2004 March For Choice (redubbed after P.C.-backlash to the "March for Women's Lives") that graced the cover of the 2004 Planned Parenthood Annual Report, still viewable online today (although, I'd lay odds, not for much longer).

Here is the cover image of that Planned Parenthood Annual Report: 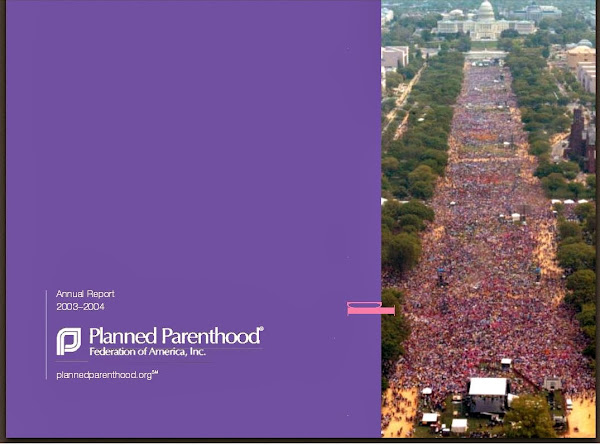 The photo was taken by Associated Press. MSM.

That march's organizers (especially NOW (whose link also proudly displays that same aerial photo) boasted then that they had "1.15 million people" there. The Washington Post allegedly reported it was about 800,000 and the Associated Press claimed it was more like "between 500,000 and 800,000."

Those figures are according to Wikipedia, although their links to that WaPo article and others are now defunct. This website, however, fawned about how "the The April 26th issue of the Washington Post devoted approximately 6 pages to coverage of the March for Women's Lives. The front page showed an aerial view of the March's one million-plus participants."

That front-page "aerial photo" could have been the very one above.

They can fool half the people all the time, and all of their subscribers all the time. But will the half that's fooled believe their own eyes, seeing those photos above, knowing what the Washington Post reported today?

Will the Washington Post change the wording of its article now? (I've got a screenshot of it reserved, just in case)

WaPo's Juliet Eilperin contributed to that article today. I think we at this blog will pass this little bit of journalistic research along to Juliet and to the WaPo ombudsman for their edification. Here's where to write if you'd also like to bring these facts to their attention:

readers@washpost.com
Juliet Eilperin, juliet.eilperin@washpost.com
Editor Martin Baron (who "will be out of the office until January 27 and may be unable to respond to email promptly. If this is urgent, please contact [his] assistant, Jen Crandell: jen.crandell@washpost.com ")
Call 703-594-9142.

According to this, there really is no independent-thinking ombudsman there anymore, just a "reader representative".

Why am I not surprised.

I've written to the folks at the Washington Post, will update if we hear back from them.

A side note: I realize the "National Mall" extends past 7th Street to 3rd Street, yet the WaPo report also clearly states "the Mall was filled with people." Had it been filled only "between Seventh Street and the Washington Monument," the reporter would likely not also have written "the Mall was filled with people." This newspaper, like New York State Gov. Andrew Cuomo and most newspapers, is too much against anyone who is against abortion. They have no predilection to honestly report any truth that could paint pro-life folks in positive or impressive ways. No, they would have instead just written that "the Mall was just over half-filled, or five-eighths filled."

Maybe now the WaPo can understand why saying "thousands" marched for life on January 22nd, is so transparent and insulting to us, while also making them look foolish and inept.

"Thousands." Yeah, Seven-Hundred and Twenty Thousand to over One-Thousand times a Thousand.

And, as I've said once before, they pay those "journalists" the big bucks.