an After abortion: "The march is about mothers and babies."
REAL, CONFIDENTIAL, FREE, NON-JUDGMENTAL HELP TO AVOID ABORTION, FROM MANY PLACES:

"The march is about mothers and babies." 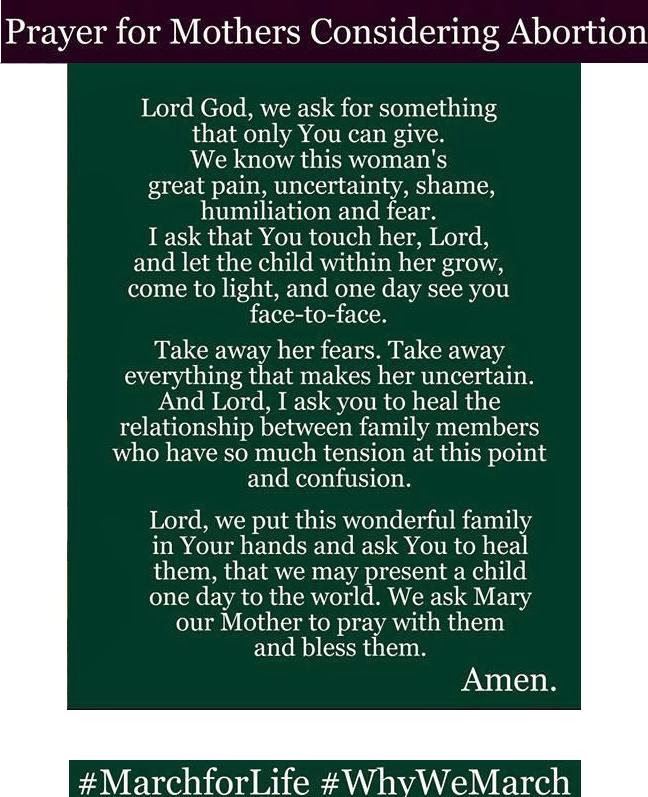 UPDATE: LIVE FEED NOW AVAILABLE AT BREITBART.COM. This is the narrated one.


The 360-degree video is going live at this site. Just click the PLAY triangle up top.

Left-click and hold, and drag your mouse pointer left, right, up, down and see the entire picture as if you were there. I'd love to know how they (Immersive Media) do this. (Is it four cameras, each one pointing in one of the four directions? Remarkable.)


Annie and I were hoping to make it; the &%$@# snowstorm right when we'd be traveling derailed us, I'm sad to say. We hope to be blogging today, in place of going. Not the same, but the next best thing...

This isn't the first time hundreds of thousands of people have marched for life in such arctic cold and snow. It probably won't be the last either, unfortunately...


This is one of the great stories about one woman changing her mind about abortion.

Translation: "Prayer for the March for Life in Washington. May God help us to always respect life, especially that of the weakest!"


The SilentNoMoreAwareness women are on the dais, our friend Nicole Peck, speaking. The wind is whipping their I REGRET MY ABORTION signs wickedly back and forth. It is 14 degrees there now. Windchill is 3 degrees below zero. AbortionForgiveness.com is the website.

You can hear the speakers' teeth chattering, it's so cold. You can see people shivering.

I was a counter-protester, a silent one, along with Annie, at the March for Choice on that same ground, just about 10 years ago, in 2004. But it was late, late April: the dogwoods were in bloom, and we were in T-shirts. We doubt very seriously if their marchers would all come out for their one-time march had the weather been like it is there today.


The Facebook page of the March is here, and the TweetFest called "Why We March" is here.

Reading even some of those tweets, there are TONS of busses that were cancelled because of the snowstorm, tons of people who couldn't get their plans (planes, trains, babysitters, etc.) to work because of the storm. God bless all who tried, and all who made it in spite of the "climate change."


1:18pm: the rally's speeches are now over, and even before that I could see people already starting to walk in the march, but now the video is stilled. I hope they're just trying to set up one of their 360-degree cameras where the actual marching is taking place. I'll stay tuned...just heard a roar come up from the crowd, the march has begun, though the video is frozen from the end of the rally itself. There are women speaking now, sort of narrating the March. They remarked that the crowd, at least so far, looks no smaller than it did last year. After the march, they said they'll be going live again in front of the Supreme Court.


Military Veterans For Life on Facebook. Love their logo.


Janet Morana of Silent No More Awareness just said to remember that any of the women speaking or holding their I REGRET MY ABORTION signs, are only there because they've been through steps already toward healing from their regret. Their families already know, because they told them long before today. NO one is being exploited here; NO one is here because she's been pressured to be there. As Janet says, we were already exploited by the abortion industry, by our abortions. These women are out there in public as a result of their healing, to spread the good news of that. I can vouch for that. There is no flippin' way I could have held that sign a decade ago, or told my story, even on paper, had I not already begun healing. Prior to that process starting, I couldn't even say the word abortion. Thinking about it, would dissolve me into tears or flight, escape, from whatever was making me think of it. It's a pretty universal reaction.


The Silent No More Awareness effort has come a long way in 11 years:

Since officially launching the Campaign in 2003, 4,641 women and men have shared their testimonies at 771 Gatherings that have occurred in 48 states and 10 countries with more than 159,429 spectators having heard the truth about abortion’s negative after-affects. More than 9,027 people have registered online to be silent no more.

Now they're talking about men in prison who've been through Rachel Vineyard retreats over their regret of their involvement in abortions of their children. One man's story was read today in front of the Supreme Court, by someone else, another man, because the prisoner wanted his story read here. "It's hard enough to acknowledge that abortion hurts women, imagine how hard it is to acknowledge that abortion hurts men," said the male social worker, working with Priests for Life and Rachel's Vineyard who read that man's testimony.


Now a woman is being interviewed who was pro-choice for 30 years and one month away from becoming a board member for her local Planned Parenthood, who was moved to face the truth of her abortion. She had long overdone alcohol, drugs, she thought prolife people were wackos, zealots, and she lost a lot of friends when she felt called to attend a Rachel's Vineyard retreat. It turned her around, and she said "I just turned to the truth, finally." The calmness in her voice was amazing. She was so at peace, that what she was now doing, being Silent No More, is the right thing. It took me about 15 years, and I know it took Annie 20 years to overcome her denial; this woman's 30 years tops that, but it isn't unusual. Grandmothers have thanked us for coming out with our stories, which allowed them to admit their own grief and pain from their abortions. Imagine living with that, for four and five decades, six even. Mind boggling.

Now they're interviewing a woman in the Navy, where they don't want to talk about anyone's regret over their abortions. It's her first time giving her Silent NO More testimony in public, and she's a little nervous, but she couldn't be more among friends. The stories of these women and men are often earth-shattering and sad, but not hopelessly so. They all, to a person, have found comfort, solace, help, recovery, or they wouldn't even be able to be there, never mind speak in public about it.

We've long known the mainstream media (MSM) refuses to cover this the way they cover all pro-choice events. Annie once blogged about the dearth of MSM coverage. We don't expect they ever will cover it as they should (you can see some links to national media here, like National Review). All the MSM ever does is say "Thousands" of marchers, just as the Washington Post, USA Today are doing today, uhhhhhhh-gain. So tired, this media blackout is. So lame.

In fact, check out Annie's debunking of the media's dishonest coverage, today, calling the Washington Post out onto the carpet.

So just take to the social media, and retweet, pin with Pinterest, and Facebook all the great stories people have been sharing all this past several weeks. Blow up Twitter and the other sites with all this news. The media will still ignore it, but it will shake them to their core to see how much social media blows up with the truth they refuse to recognize.

They finished the coverage just now, about 3pm, with the prayer shown at the top of the post, for any woman considering abortion.

The March for Life itself will re-air at 10pm Eastern time tonight on EWTN's Youtube channel and on Breitbart.com.

Speaking for those who can't

There's a huge, red, actual ELMO doll wearing a PRO-LIFE bandana around its neck. Kinda tells you about the youth in attendance. I mean, I don't think I'd carry Elmo on a big pole at the MFL at my age, but God bless whoever's carrying that obviously heavy, bulky character.

That one doesn't seem extraordinary, but thinking about it, the way the sign is laid out, with "I AM" bigger than the "Pro-Life", it makes me think it's a take on the Hebrew reference to Yahweh (God), as "the great I AM." How God is bigger than anything else, certainly bigger than who and whatever we are. Nice subtlety.


Rest in Peace, Nellie, and thank you. The March goes on, for the sake of women, not just unborn children, everywhere. Just look at how many times the Silent No More women and our I REGRET MY ABORTION signs are shown in this video.