"'I was wrong' are hard words to say. '"I was wrong and I will do anything to make it as right as I can' are words that take even more strength."

News, photos, crowd estimates and comments on the burgeoning post-abortion movement's presence at today's March For Life in D.C.--and elsewhere around the nation by witnesses and participants.

Unfortunately some of Freeper's commenters still don't get it and lash out at those of us who regret it in condemning, hate-filled tones. Please read that link with caution and advance warning, and ignore those who are the Pharisee-kind of "pro-lifer." Those are in the decided minority now. In time, their voices will no longer be heard, thankfully.

"With a larger turnout than in previous years, at least 250,000 pro-life advocates marched in Washington Monday for the annual March for Life."

That was with a "Wind Chill Advisory In Effect Until 10 Am Est Monday For The Washington Area, of 4°F (actual 19°F)," after a day-before storm had left 4-5" of new snow on the Mall and nearby streets.

*** By way of comparison, a flashback: "There are no official estimates of the crowd size as the National Park Service no longer tallies official crowd counts. However, CNN reported that Washington D.C. police estimated that 250,000 people participated in the pro-abortion march [on April 25, 2004]."

On that day, in the counterprotest, I was in a T-shirt and cotton blazer, with temps described as follows: "April 25, 2004: Cloudy, breezy, and very cool conditions persisted across the D.C. area all day. Temperatures struggled to reach 60 degrees." *** 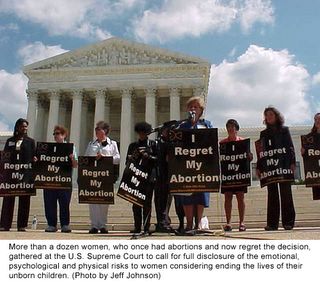 "Actress Jennifer O'Neill was joined at a rally at the Supreme Court on Thursday Jan. 20, 2005 by actress and singer Melba Moore and Dr. Alveda King"

Interesting news about the presence of Catholic Church representatives, and faithful who are there in D.C.

Why march every January??"

"The March is organically grown, not a particularly organized event. There's no promotion, no cajoling of people and associated special-interest groups to attend (like the so-called March for Women's Lives). The weather is the worst of the entire year, yet the number of attendees only grows. It's something pro-lifers are just drawn to do. The march provides an opportunity to see a hundred thousand friends, gathered together to mourn the loss of 45 million of our babies.

~ Jill Stanek is a nurse and pro-life activist

Captain's Quarters on the hijacking of the legislative branch of our government "by nine unelected men or women in robes."

Hope for the NEA? Or just a token? Which do you think, readers? At any rate, KUDOS to National Education Association (NEA) chiefs and prolife members in Ohio and Pennsylvania, for speaking up and making yourselves heard!